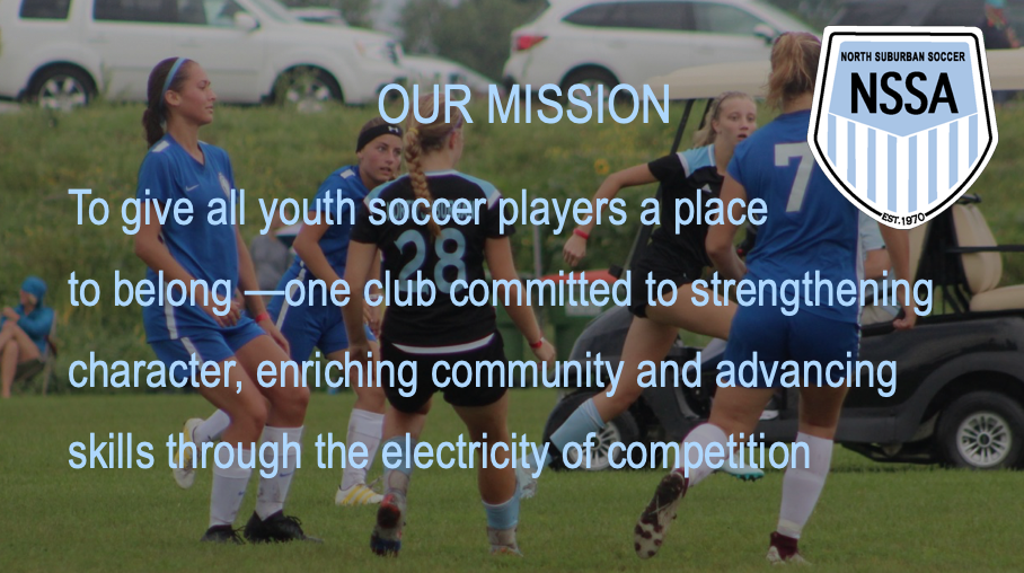 We are volunteers serving more than 1,000 youth through organized recreational, competitive and junior academy leagues for ages 3 through 18. Welcome to our Club!

New mission statement expresses the club’s promise to give all soccer players in Roseville, Shoreview and the surrounding communities a place to belong.

Roseville, Minn. — North Suburban Soccer Association (NSSA) announced today that its board of directors has approved a change to its club mission statement.

NSSA’s mission is now "to give all youth soccer players a place to belong — one club committed to strengthening character, enriching community and advancing skills through the electricity of competition.”

With this shift, NSSA reaffirms its 49-year commitment to developing area youth soccer players to achieve lifelong success on and off the field. Founded in 1970, NSSA is the oldest youth soccer club in Minnesota.

By approving the new mission statement, NSSA is pushing back against a trend in US youth soccer toward declining participation levels fueled by hyper-competitive environments and skyrocketing costs.

“As a club, we recognized a shift happening in youth sports toward clubs that focus only on developing elite players. It’s an atmosphere that leaves too many players behind,” says club president Mike Meloch. “There’s nothing wrong with being competitive and we have many elite teams that compete with the best in the region or country. But we believe soccer, like no other sport, is a game that brings everyone together through the spirt of competition. That’s why it’s important to affirm that everyone has a place at NSSA.”

NSSA serves over 1,000 competitive, recreational and Jr. Academy players, ages 3-18, across the northern suburbs of the Twin Cities. Guided by this new mission, the club will mark its upcoming 50-year anniversary by increasing its emphasis on community outreach, coach development, player safety and experience, inclusivity and partnerships — five pillars of NSSA’s strategic goals.

“I’m extremely pleased to announce our new mission,” says Meloch. “As a club, we’re excited to keep the priority on the kids. We want to give every young person the exact right environment that meets them where they are. We believe we can help every player learn, grow and have fun — regardless of who they are, where they live or how fast they can run.”